Back in the boat, I began adding the structure for the mast step.  First up was a solid composite stackup of carbon on the hull where the mast tube will be affixed.  I added a horizontal piece of plywood for the mast step on top of that. 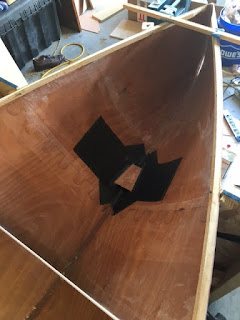 Next I added another healthy stack of material over that to stiffen and distribute the load from the mast base. 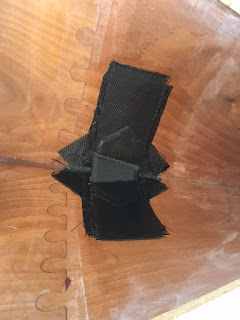 Next up was the remaining bulkheads.  This would include the aft centerboard trunk bulkhead and the aft cockpit bulkhead.  I'm really happy with the shape of the boat with the temporary bulkheads in and I'm pretty sure the boat is off script from the initial design.  I pulled the shape from inside of the hull using a jig I made and 1.5" strips of plywood that slid down the slot in the top.  I then transferred the shape to some construction paper for the bulkhead pattern.  It worked great! 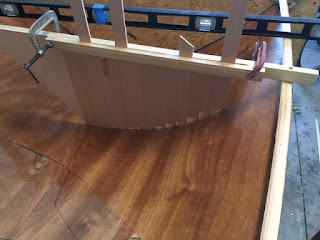 Transferred to the pattern material: 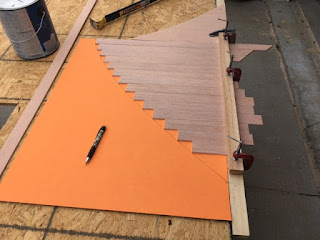 Reminds me of a calculus class.  Area under the curve, anybody?  Nerdy engineering moment there.  If you know what I'm talking about feel free to comment.  This process was repeated for the remaining bulkhead locations. I cut out and glued in these bulkheads.  The cockpit geometry is starting emerge now.  I like it. 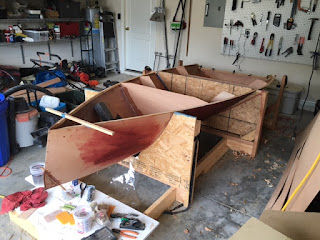 Next up I glued in .750 x .500 rails around the perimeter of the bulkheads where the deck will attach.  This added structure and gives me a surface to bond the deck too.
All clamped up: 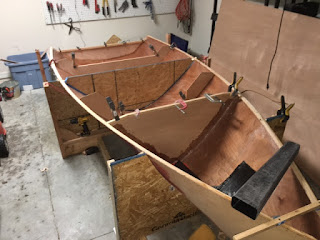 To increase the stiffness of the transom where the rudder will eventually attach, I added a composite laminate to that area.  I did the same at the bottom of the aft cockpit bulkhead where the hiking straps will bolt in too. 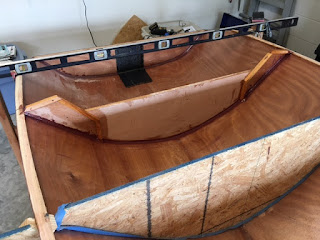 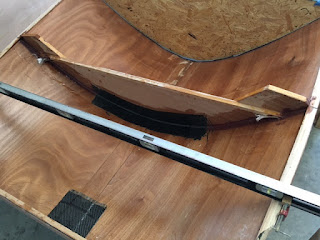 Bring on the roll of carbon fiber.  It's time to build some composite parts.

First up was the mast tube.  I like the rocking mast tube concept that we did on the Rodger Wedges so I will do that again.  While other boats in the fleet selected to go with a slot shape for the top of the tube, I was concerned that building the mold for this shape would probably frustrate me.  Additionally, I would like to support the tube along the forward surface internally,  This is difficult when it's cylindrical and only makes contact at the tangent point.  I went with a square cross section with 1/2 inch fillets on the edges.  The mold was easy to build and the part popped out nicely.  I have a plan for ensuring that the tube doesn't point load the mast when rocked all the way forward and aft, but we'll go into that detail later.

Here's the mold made with MDF. 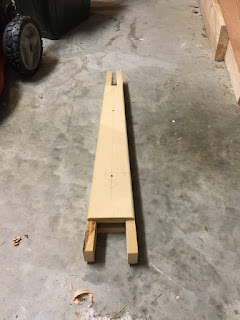 I wrapped it with release film and layered on the cloth. Here's the stackup I used:

It came out right at the anticipated .090 thickness. Yay math! Stay in school, kids.
After I wrapped it, I added another layer of release film and then clamped it up.  I probably should have bagged it, but it didn't seem necessary for this part at the time. 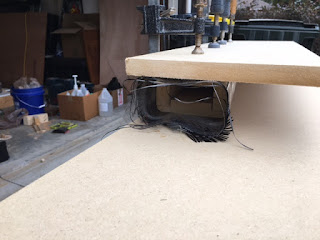 With a little brute force and awkwardness the tube released from the mold.  The inside turned out nice.  There's one void, but I don't think it's going to impact performance. 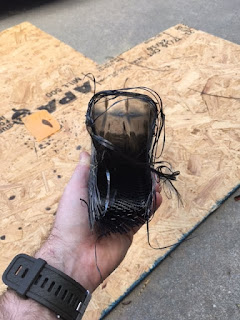 Here it is after a little clean up. 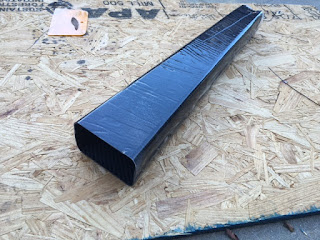 A touch of sanding on the outside and this thing is good to go.

Next up was the daggerboard trunk.  Same process.
Here's the mold: 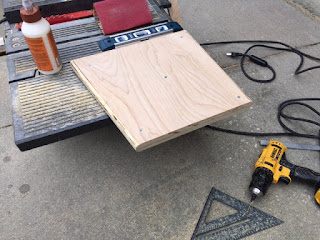 All wrapped up and going into a clamp I built for it to cure in. 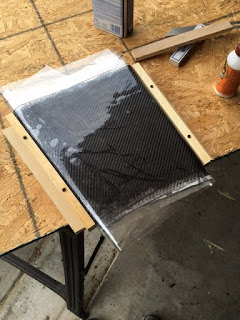 Here's the finished product before trimming.  We finally had some cold weather and I didn't have any heaters.  Stuff I added to the boat finally cured up a day later, but the daggerboard trunk was moving slow so I popped it in the oven the next morning.  It kicked after that, but I think it embrittled the film a bit or it wasn't quite done when I pulled it off, either way, the film didn't come out of the inside real nice.  That's ok.  Less marring on the board with a polyester film touching it rather than the hard epoxy, right? 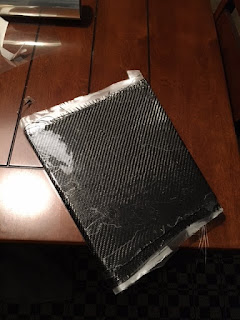 The boat's first trip and the advent of real progress

While ill advised in it's exceptionally unsupported boat-like shape, the moth made the thirty mile trip to it's new womb.  I wish I had some video or pictures.  I should have rented a moving van to do this, but feeling cheap (expensive attorneys will do that to you) I selected to move the 11' boat and fixture in my truck bed that is only 5'-6.  I took only back roads, I did it at night, and I couldn't go more than 30 mph to ensure the hull doesn't flutter it's way to some sort of failure mode.  It took me a little over an hour to make the trip.

After finishing up the house remodel enough to live in the house, I was ready to start working on the boat again.  It's getting cold in most of the country, but not here.  It's still a lovely 87 degrees as my neighbors start putting their Christmas decorations up in this post Thanksgiving weekend.

At this point the boat needs some real structure.  I built a couple forms for the holding fixture and secured the hull to these.  I also leveled the fixture in location.  It won't move again until the inside of the boat is complete.  The first step on the inside of the boat would be to put the rails on the gunwales.  Bring on the bucket-o-clamps - you will be busy for the next month. 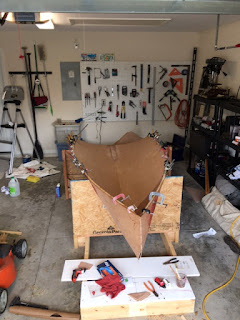 Rails cured, I put two temporary bulkheads in and screwed them to the holding fixture.  Next step was to start cutting and gluing in some real bulkheads.  If you're comparing this image to what you think a Mistral looks like, spoiler alert, they aren't the same, and yes, the bow is swept aft.   I spent some time working on a bow that removed a portion of that massive amount of volume.  Since the Mistral design is near impossible to pitchpole, I think I have some wiggle room in this aspect of the design. 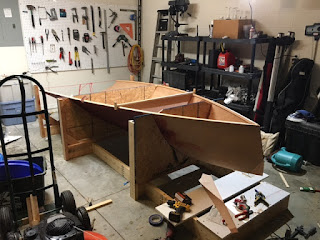 The other massive deviation from the Mistral design is the transom.  I am moving away from the parabolic or elliptical shape that had been previously employed.  It kinda looks like the old Rogers Wedge transom.  I built a fixture to help ensure symmetry and help ensure that there's a fair transition into the rest of the hull.  It worked well. 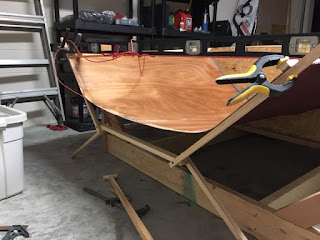 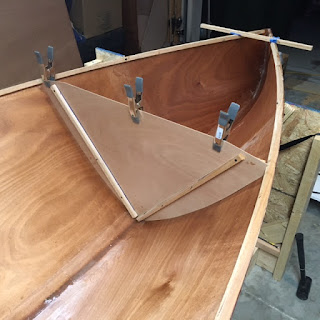 And then glued and glassed in place.. 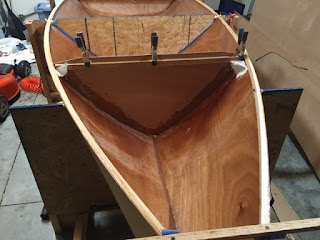 The transom was next... 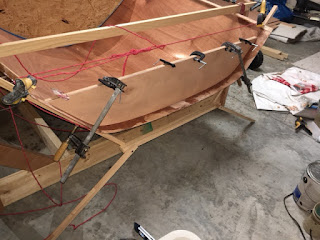 Finally, I intentionally hacked off the bow where the stem and keel meet.  I really was looking for a shape right at the bow entry that was a bit fuller and didn't have the concavity.  The Mistral design has the bow just barely kissing the water while sailing.  Hell, on the Mousetrap, you had to work to make the boat sail with the stem in the water.  I don't think I'm going to have a problem piercing the water with this design so I think this area of the boat required additional attention.  So after cutting off a diagonal section of the hull, I went back and filled it in with some pre-shaped plywood pieces.  Here's the first one going into place. 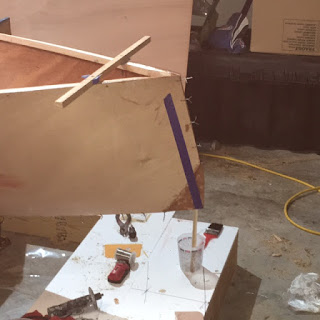 Posted by The Jackalope at 4:07 AM No comments:

OK, so I haven't been real diligent on documenting my progress.  That changes today.  Rewind to March 2015...

When I left off the boat was still flat.  I built a holding fixture to dangle the boat from while the wood adjusts to it's new shape.  The next step is to glue the butt joint at the transom and stitch it up.  It's starting to look like a boat now. 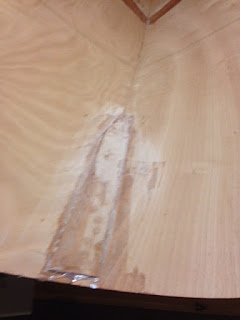 Here's the butt joint at the aft end of the boat.  I tapered the leading edge before gluing it in.  This was a good call as the transition from a smooth curve to V shape along the keel is exceptionally fair. 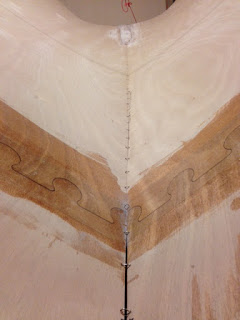 Here's the boat hanging out with the stiches in.  I stitched the two hull sections together using 18AWG copper wire every two inches. 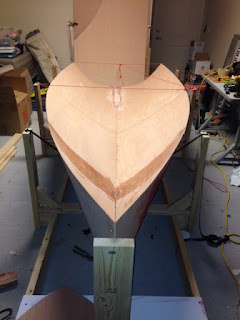 Here's how she looks all stitched up and restrained in the holding fixture.  The boat spent the majority of 2015 in this position.  See ya in the fall, boat.